Detail of the Buxheim Organ Book

While teaching in the late 1940s at Southern University, a historically Black university in Baton Rouge, Louisiana, Eileen Southern read Gustave Reese’s Music in the Middle Ages (1940), one of the earliest English-language studies of medieval music. In 1952, her fascination with the material led her to enter the PhD program in musicology at New York University, where Reese (1899-1977) was on the faculty. Before embarking on her own research, Southern assisted Reese with musical analysis and indexing for his book Music in the Renaissance (1954, revised 1959). At the time when Reese was writing and Southern completed her graduate studies, the emerging discipline of musicology favored scholarship on European music, in particular medieval and Renaissance music from Western Europe. As those traditions had then been little-studied, much of this early research, including Southern’s, was foundational.

On Reese’s recommendation, Southern chose the Buxheim Organ Book (Buxheimer Orgelbuch, D-Mbs Mus.ms 3725) as the subject of her dissertation. This constituted her first major project on Renaissance music, and it followed a master’s thesis that had explored Black folksong in symphonic music. Southern’s dissertation included an analysis, an index, and a partial transcription of this extensive German collection of sacred and secular keyboard tablature. One of Southern’s conclusions was that the date of the manuscript could be narrowed down to ca. 1455-60.

The Buxheim Organ Book includes over 250 original compositions and arrangements by some of the most celebrated composers of the time, including John Dunstable, Guillaume Du Fay, and Gilles Binchois, as well as lesser-known musicians such as Wilhelmus Legrant and Johannes Tonrroutt. Through her study of the collection, which had not yet been explored in depth, Southern sought to “reveal the state of music, vocal as well as keyboard, in South Germany during the early Renaissance—its composers, its musical forms, its stylistic resources, and its Aufführungspraxis [performance practice]—as well as the relationship between this music and that of Central Europe." It took Southern about three years to transcribe the entire manuscript into modern notation, after which she began her analysis. After completing the transcriptions, Southern learned that the German musicologist Bertha Wallner had also just transcribed the Buxheim and was publishing the results (1958-59), which unexpectedly prohibited Southern from publishing her own transcriptions. 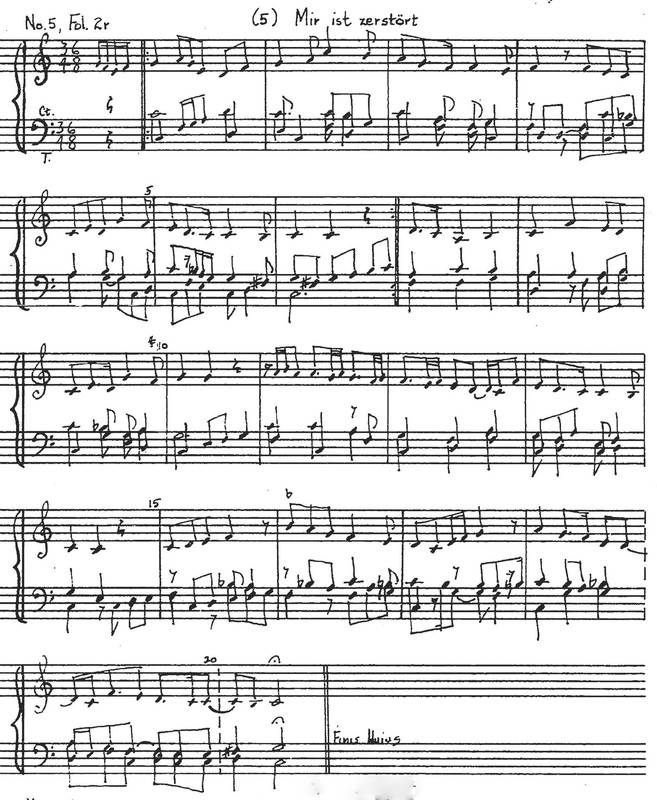 Southern’s transcription in her dissertation of Buxheim no. 5 “Mir ist zerstört” and the original tablature in the manuscript (below). ProQuest Dissertations & Theses, Bayerischen Staatsbibliothek. 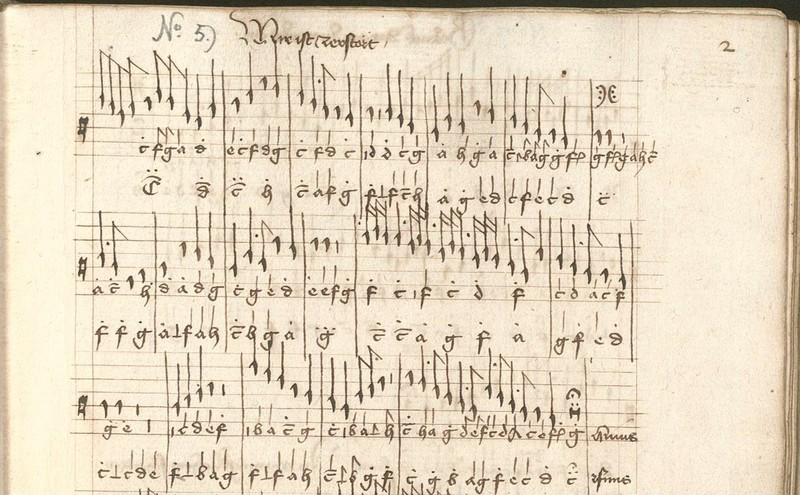 Southern’s new contribution in relation to the Buxheim Organ Book thus became analytic and conceptual. Among her conclusions was that “the Buxheim music represents the co-mingling of two great influences: that of German tradition . . . and that of the central musical cultures of the time." Her dissertation was accepted in 1961, and it was subsequently published by the Institute of Mediaeval Music (Brooklyn, NY) in 1963.

Beyond the Buxheim Organ Book

Having established herself as an authority on the Buxheim Organ Book, Southern wrote several articles that continued her examination of fifteenth-century German music. The first was an updated index to the Buxheim Organ Book (Notes, 1961) to accompany Wallner’s modern edition (Wallner had included only an index for the original manuscript, which did not match up with the modern edition’s page numbers). Then in “Foreign Music in German Manuscripts of the 15th Century” (1968), Southern offered an overview of non-German compositions (with original texts in French, Italian, or English) that were included in four German manuscripts; she then discussed ways in which those pieces differed from their “foreign” models. And in 1969, Southern published an inventory for the contents of the well-known chansonnier E-E MS IV.a.24, a fifteenth-century manuscript containing largely French and Italian secular works, held at the Monastery Library of San Lorenzo de El Escorial (a town near Madrid). 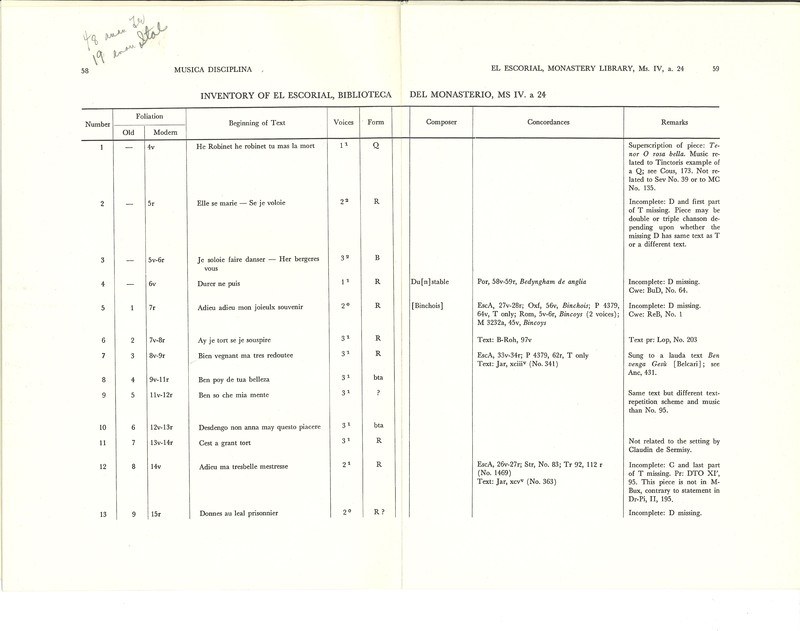 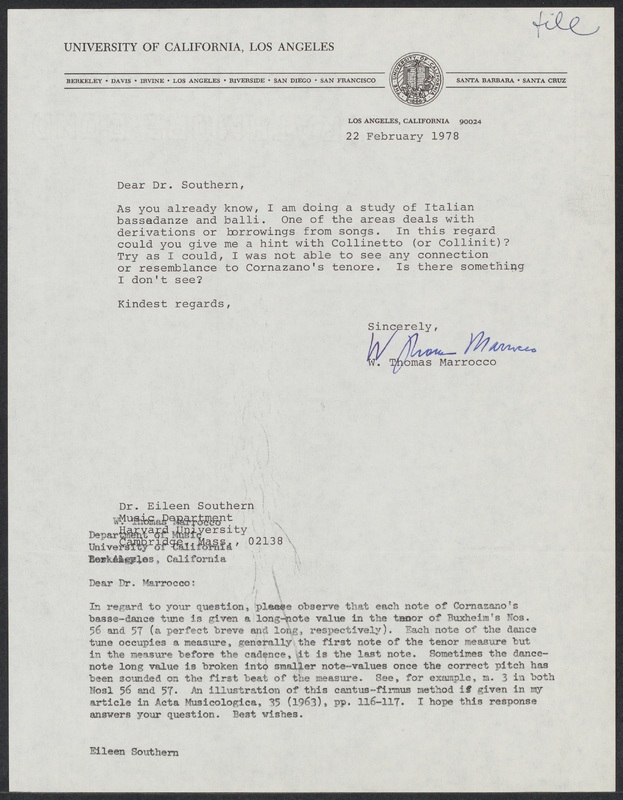 Another of Southern’s scholarly interests was the basse danse, a courtly dance popular from the late Middle Ages through the mid-sixteenth century. She wrote two articles on the musical practices related to this dance, drawing once more on her extensive knowledge of fifteenth-century manuscripts. In “Some Keyboard Dances of the Fifteenth Century” (1963), Southern explored various issues related to basse danse in the Buxheim Organ Book, including implications for historical performance practice. In “Basse Dance Music in Some German Manuscripts of the Fifteenth Century” (1966), she introduced scholars to previously unknown polyphonic examples in the genre. In the letter reproduced here, Southern responds to a basse danse-related query from colleague W. Thomas Marrocco, then emeritus professor at the University of California, Los Angeles.

Southern’s scholarship—mainly manuscript studies—helped make those materials more accessible for future study. In 1968 she chaired and helped establish the American Musicological Society and Music Library Association Translations Center, a joint enterprise of the two organizations based at Brooklyn College. The project sought to create a repository of unpublished translations of early musicological texts, such as primary documents, libretti, and scholarly articles. Southern had attended the 10th Congress of the International Musicological Society held in Ljubljana, Yugoslavia (now Slovenia) in 1967, and her focus on expanding musicology beyond Western Europe is evident in the announcement she wrote to advertise the Translations Center:

The Committee anticipates that the greater portion of the material received will be translations from French, German, Italian or Latin into English, as has been the case so far. But it is important to emphasize that the scope must be broadened to include the translating of musicological literature in the Slavic languages and other less available languages. The musicological activity in areas other than Western Europe and the United States was vividly brought home to those of us who attended international congresses in Poland or Yugoslavia. While English translations are preferred, the Center will accept translations in any of the more familiar European languages.

Renaissance Scholarship After The Music of Black Americans

By the mid-1970s, Southern’s research interests had largely—but not completely—shifted to studying the music of Black Americans. Although early European music and that of African Americans seemed distant from one another, Southern forged a connection in her short essay “Early African Musicians in Europe” (1973). Southern identified the decline of the Ottoman Empire’s power in the early eighteenth century as the catalyst that resulted in the incorporation of percussion and Black musicians in European military bands. As European militaries incorporated what they considered to be exciting and unusual music into their own practices, “Africans were generally employed to play the Turkish music—undoubtedly because their dark skins added the necessary touch of glamor and their skill in playing percussions [sic] made them indispensable."

Southern’s later-career Renaissance scholarship moved beyond German texts to highlight music and musicians that had not been traditionally studied. Her essay “A Prima Ballerina of the Fifteenth Century” (1985) focused on the Italian princess Ippolita Sforza of Milan (1445-88). That Southern zeroed in on a woman was a notable digression from standard musicology practices of the era, yet she did so with the archivally driven orientation of her training. She acknowledged that dance in fifteenth-century Italy had been studied extensively, but highlighted that little research had been conducted on the performers and cultural uses of music and dance. Through analysis of dance treatises by the leading choreographers of the time (e.g., Guglielmo Ebreo da Pesaro, Antonio Cornazano of Piacenza, and Domenico of Ferrara), Southern traced Sforza’s life and her career as a dancer. Sforza’s royal status made her an influential figure in Renaissance Italy, and her performance of the morisca dance along with the singing of ballatas was a trend at her court. Soon after this essay was published, Southern was at work on a modern edition of Obi; or Three Finger’d Jack, a pantomime by Samuel Arnold published in 1800 that was based on the story of Jack Mansong, an escaped African slave in Jamaica killed after having been “driven by the realities of slavery to react violently."1 Southern’s work on Sforza and Obi added a fresh and more inclusive perspective to the early music studies that had first captured her attention decades previously. 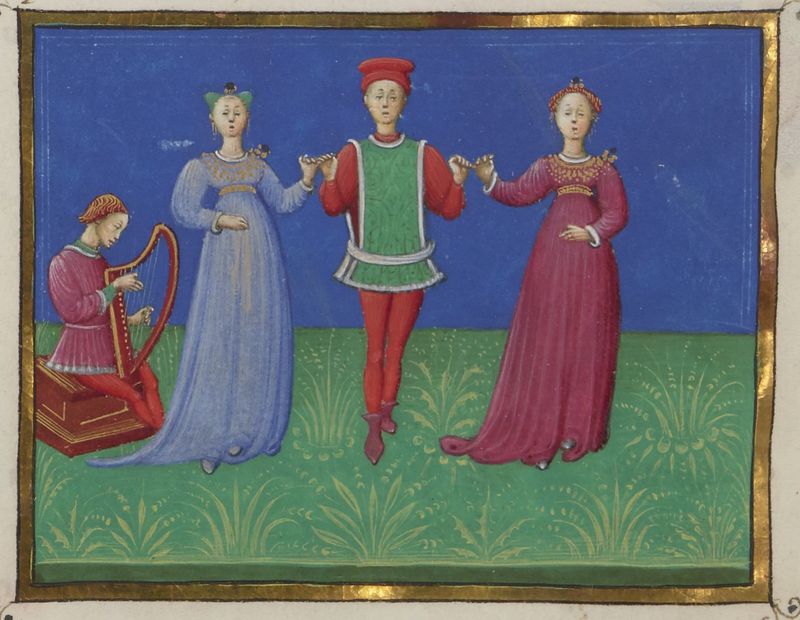 Unless otherwise noted, quotations are from Southern’s extended interview with Judith Walzer, which took place in 1981; the original tapes are housed in Harvard’s Henry A. Murray Research Archive. Facsimiles are from Southern’s personal archive at the Harvard University Archives. 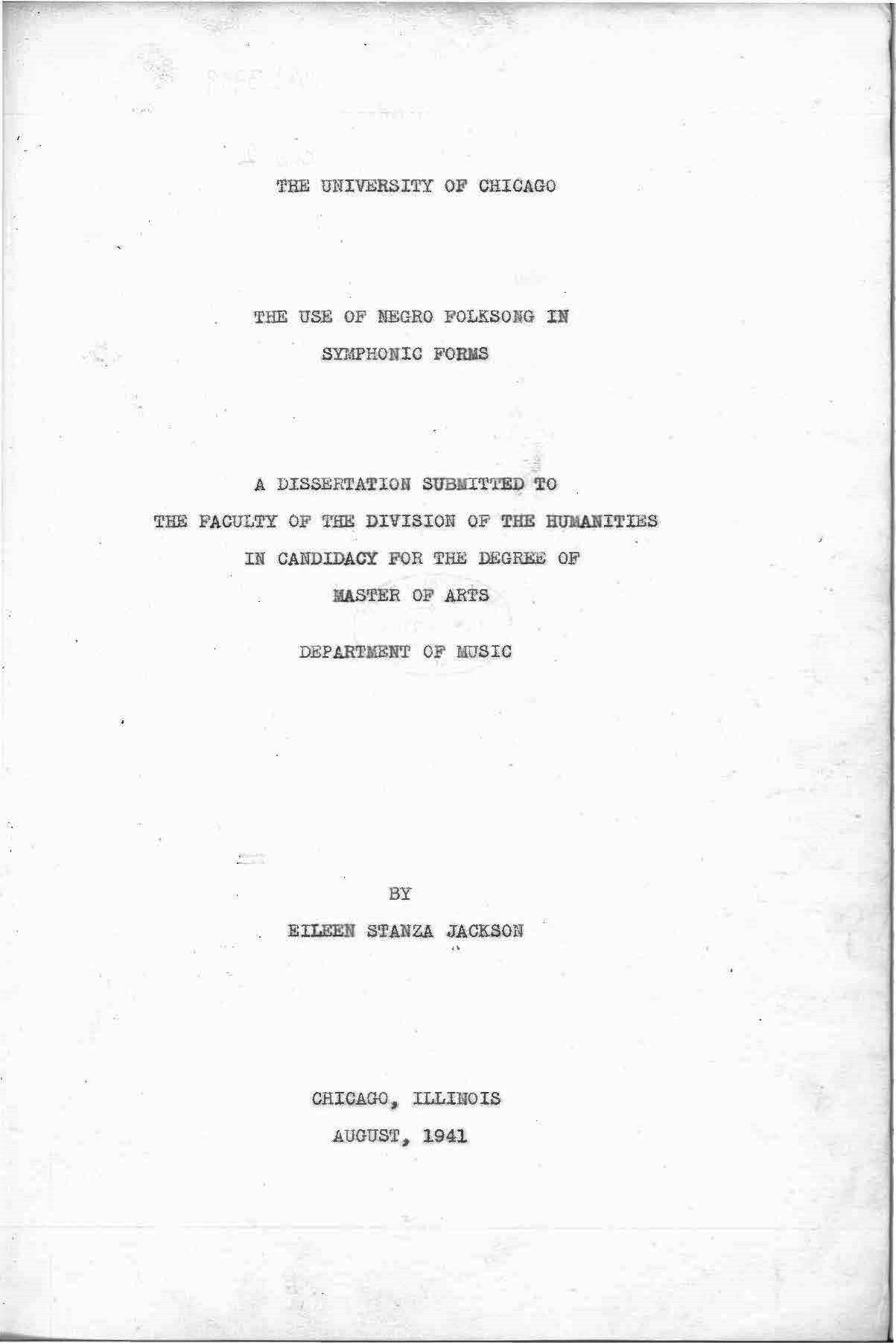 The Music of Black Americans 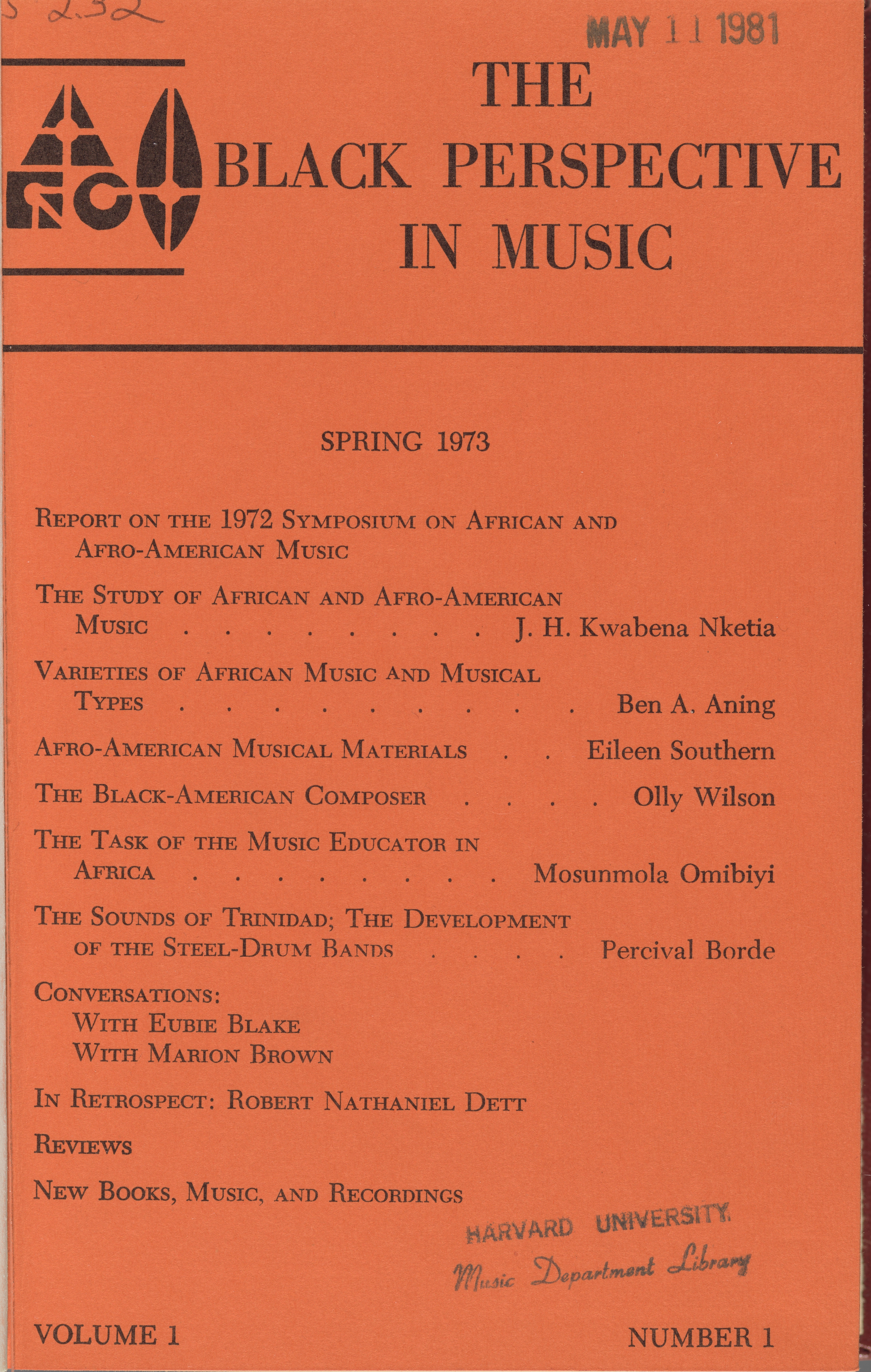 The Black Perspective in Music