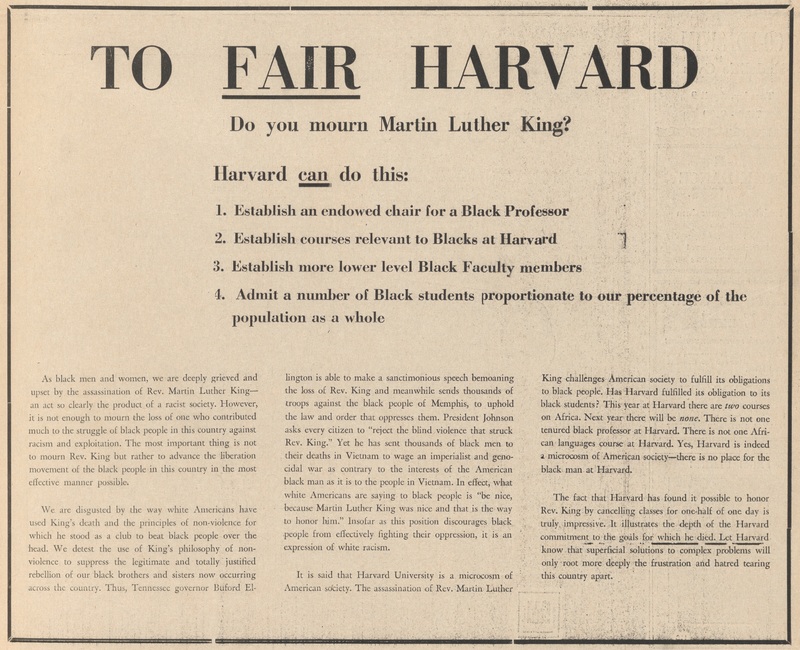 1. Establish an endowed chair for Black Professor 2. Establish courses relevant to Blacks at Harvard 3. Establish more lower level Black Faculty members 4. Admit a number of Black students proportionate to our percentage of the population as a whole." The text below this reads "As black men and women, we are deeply grieved and upset by the assassination of Rev. Matin Luther King-- an act so clearly the product of a racist society. However, it is not enough to mourn the loss of one who contributed much to the struggle of the black people in this country against racism and exploitation. The most important thing is not to mourn Rev. King but rather advance the liberation movement of the black people in this country in the most effective possible.
We are disgusted by the way white Americans have used King's death and the principles of non-violence for which he stood as a club to beat black people over the head. We detest the use of King's philosophy of non-violence to suppress the legitimate and totally justified rebellion of our black brothers and sisters now occurring across the country. Thus, Tennessee governor Buford Ellington is able to make a sanctimonious speech bemoaning the loss of Rev. King and meanwhile sends thousands of troops against the black people of Memphis, to uphold the law and order that oppresses them. President Johnson asks every citizen to 'reject the blind violence that struck Rev. King.' Yet he has sent thousands of black men to their deaths in Vietnam to wage an imperialist and genocidal war as contrary to the interests of the American black man as its is to the people in Vietnam. In effect, which white Americans are saying to black people is 'be nice, because Martin Luther King was nice and that is the way to honor him.' Insofar as this position discourages black people from effectively fighting their oppression, it is an expression of white racism.
It is said that Harvard University is a microcosm of American society. The assassination of Rev. Martin Luther King challenges American society to fulfill its obligations to black people. Has Harvard fulfilled its obligation to its black students? This year at harvard there are two courses on Africa. Next year there will be none. There is not one tenured black professor at Harvard. There is not one African languages course at Harvard. Yes, Harvard is indeed a microcosm of American society--there is no place for the black man at Harvard.
The fact that Harvard has found it possible to honor Rev. King by cancelling classes for one-half of one day is truly impressive. It illustrates the depth of the Harvard commitment to the goals for which he died. Let Harvard know that superficial solutions to complex problems will only root more deeply the frustration and hatred tearing this country apart.